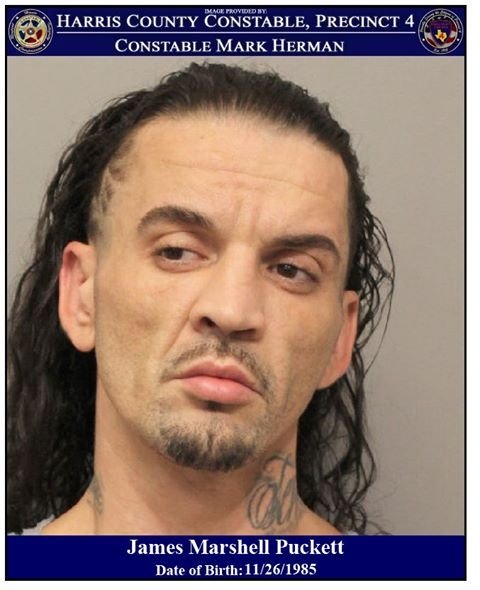 Investigation revealed that the victim retrieved money from the ATM inside the store and then returned to her vehicle. At this time, a vehicle pulled in front of her and a male suspect exited and approached her driver side door, brandished a pistol and put it to her head and demanded her money before fleeing the scene. Constable Deputies searched the area and were able to locate the suspect vehicle and conducted a traffic stop. Alfredo Cantu was found to be in possession of the firearm used during the robbery. He was also in possession Xanax, Marijuana and Methamphedamine along with scales. The suspects were detained and identified as James Puckett, Alfredo Cantu and Kiley Halmich. "James Puckett was charged with Felon in Possession of a Firearm and Aggravated Robbery with a Deadly Weapon. His total bond was set at $60,000.00. Alfredo Cantu received No Bond for Aggravated Robbery and his bond was set at $20,000.00 for Felon in Possession of a Firearm and $50,000.00 for Possession of a Controlled Substance with Intent to Deliver. Kiley Halmich's bond was set at $30,000.00 for Aggravated Robbery. All their bonds were set our of 232nd District Court." - Constable Mark Herman
Reply
* Reactions disabled on political threads.
What are your thoughts? Log in or sign up to comment Log in » Sign up »
Post a comment »