~ 5 mos, 26 days ago   Sep 05 2019, 11:49am
A convicted felon out on bond for other charges was recently arrested by PCT 4 Deputies for Aggravated Robbery, Felon In Possession Of A Firearm, Theft Of A Firearm and Possession Of A Controlled Substance. 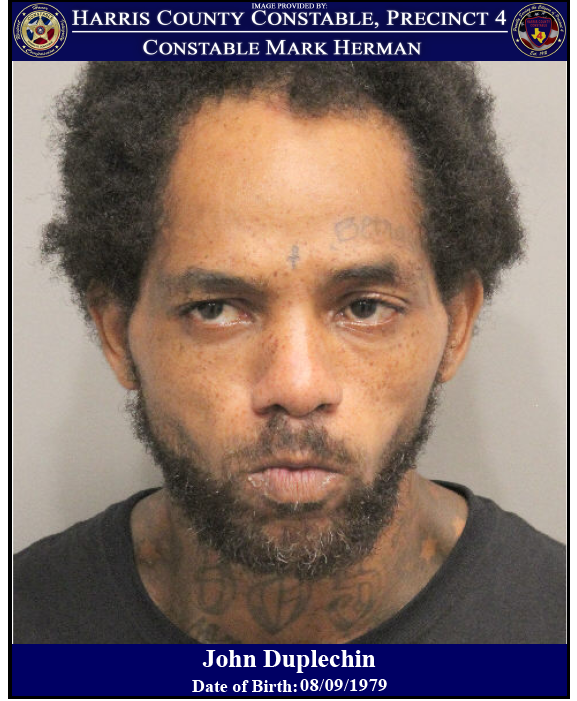 According to reports from PCT 4, on August 31, 2019, deputies with Constable Mark Herman's Office responded to the Frontier Inn located at 16510 North Freeway in reference to a weapons disturbance.Upon deputies arriving, the complainant advised that a known male, John Duplechin, pointed a firearm at him, forced his way into the hotel room and stole his firearm before fleeing the scene on foot.Constable Deputies searched the area and were able to quickly locate and apprehend Duplechin. During a search, the complainant's stolen firearm, a second firearm and narcotics were found in the suspect's possession.Further investigation revealed that he is also a convicted felon and is currently out on bond for Promotion of Prostitution."John Duplechin was arrested and booked into the Harris County Jail, charged with Aggravated Robbery, Felon in Possession of a Firearm, Theft of a Firearm and Possession of a Controlled Substance. He received No bond for the Aggravated Robbery, Felon in Possession of a Firearm and Theft of a Firearm and $1,500.00 for the Possession of a Controlled Substance out of the 232nd District Court." - Constable Mark Hermanwww.facebook.com/Pre cinct4/
Reply
What are your thoughts? Log in or sign up to comment Log in » Sign up »
Post a comment »