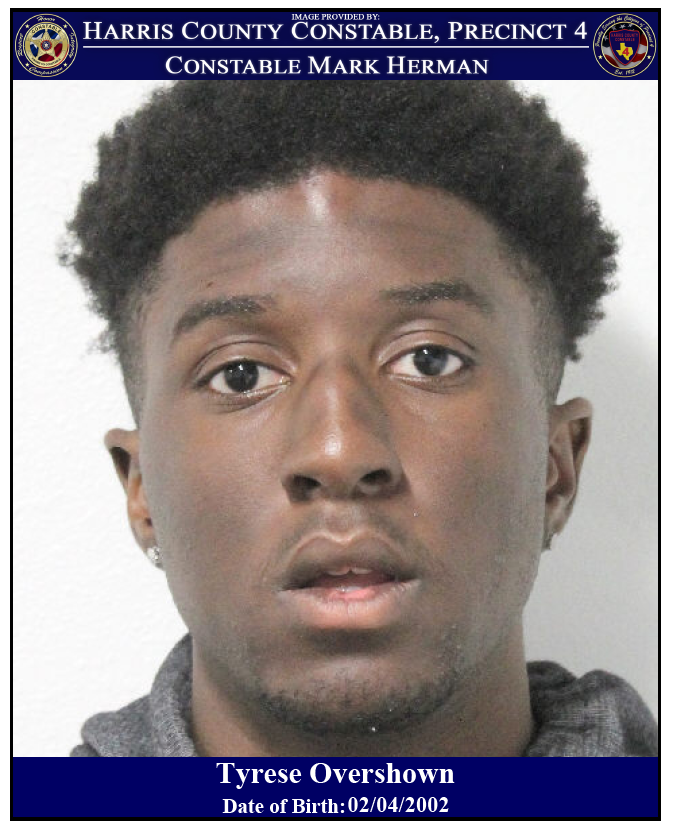 According to reports from PCT 4, on September 28, 2019, deputies with Constable Mark Herman's Office were patrolling in the 5000 block of West FM 1960 Road when a female victim advised them that three black males held a knife to her throat and demanded her purse and cell phone before they fled the scene in a Chevrolet Malibu.Constable Deputies searched the area and located the vehicle and observed one of the suspects attempting to flee on foot. After a brief foot chase, the suspect was apprehended and identified as Tyrese Overshown.Shortly after, deputies were able to locate a second suspect who was identified as a juvenile.During a search of the suspect vehicle, deputies located several knives and some of the victim's stolen property.Further investigation revealed that Tyrese Overshown was out on bond for two previous Aggravated Robberies with a Deadly Weapon."Both suspects were arrested and charged with Aggravated Robbery with a Deadly Weapon. Tyrese Overshown was booked into the Harris County Jail and received a $150,000.00 bond out of the 351st District Court. The juvenile was booked into the Harris County Juvenile Detention Center. The investigation continues to identify the third suspect." - Constable Mark Herman
Reply
What are your thoughts? Log in or sign up to comment Log in » Sign up »
Post a comment »