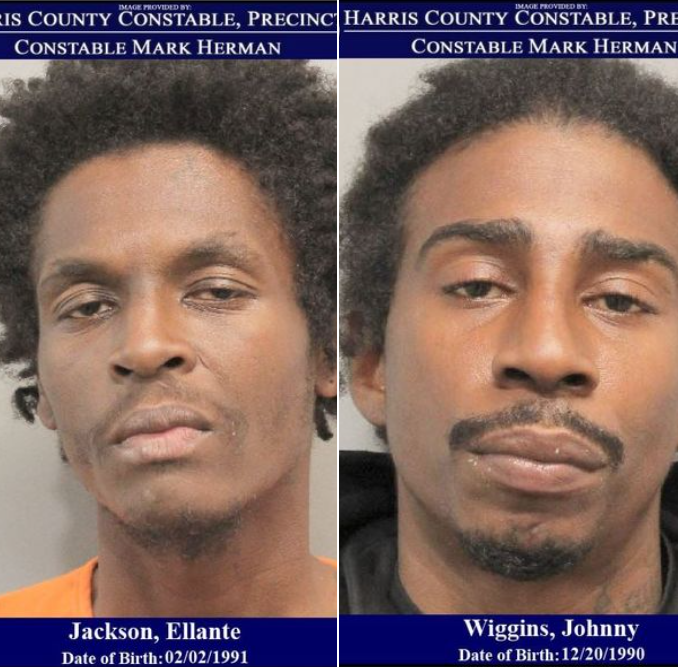 On January 10, 2021, a deputy with Constable Mark Herman's Office observed a vehicle driving the wrong way on Cypresswood Drive towards on-coming traffic at the intersection of North Freeway feeder road. The Constable Deputy initiated a traffic stop on the vehicle, which gave a stolen vehicle hit. The driver refused to stop, leading deputies on a brief pursuit before the passenger bailed on foot and was quickly apprehended by a Constable K9 and identified as Johnny Wiggins. The driver continued to flee for several miles before crashing at the intersection of highway 59 feeder and Aldine Mail Route Road where he was safely detained and identified as Ellante Jackson. He was found to be in possession of a controlled substance. The investigation revealed that prior to the pursuit, the suspects were shoplifting at the Walgreens located at 19710 Holzwarth Drive when they were confronted by an off duty deputy who was shopping. The deputy attempted to stop them and the driver brushed on the deputy's leg as they fled the scene in the vehicle.

"They were both arrested and booked into the Harris County Jail. Ellante Jackson was charged with Felony Evading, Possession of a Controlled Substance, Aggravated Assault on a Public Servant and Unauthorized Use of a Motor Vehicle. His total bond was set at $75,000.00 out of the 208th District Court. Johnny Wiggins was charged with Evading and his bond was set at $100.00 out of County Court 7." - Constable Mark Herman
Reply
* Reactions disabled on political threads.
What are your thoughts? Log in or sign up to comment Log in » Sign up »
Post a comment »